The Commonwealth has the weakest donation laws in the country. Parties are able to hide the source of donations because of the high threshold of $14,500 for the disclosure of donations, the fact that multiple donations under the threshold to different branches need not be aggregated and disclosed, and the fact that the definition of ‘gift’ under the Commonwealth Electoral Act 1918 (Cth) (the Act) is unjustifiably circumscribed. They also include what the Australian National Audit Office ( ANAO) has described as the partial effectiveness of the AEC in administering the financial disclosure scheme established under Part XX the Act: as one of Australia’s key accountability institutions, the AEC requires adequate resourcing and powers in order to fulfil its mandate.

The term ‘hidden money’ refers to party income of unexplained origin. It is calculated by determining the difference between declared party income, and the portion of that income which is of identifiable provenance, such as public funding, subscriptions and intra-party transfers.

Figure 1 shows the total income disclosed to have been received by political parties in the2020/21financial year.1 Of this, 38.6% is of unexplained origin.

There is a substantial difference in unexplained income disclosed by the major parties: some 35.9% of the more than $2 billion reported as income by the Coalition is of unexplained origin (Figure 3), whereas of the almost $1.8 billion received by the ALP, the source of 24.5% is unexplained (Figure 4). 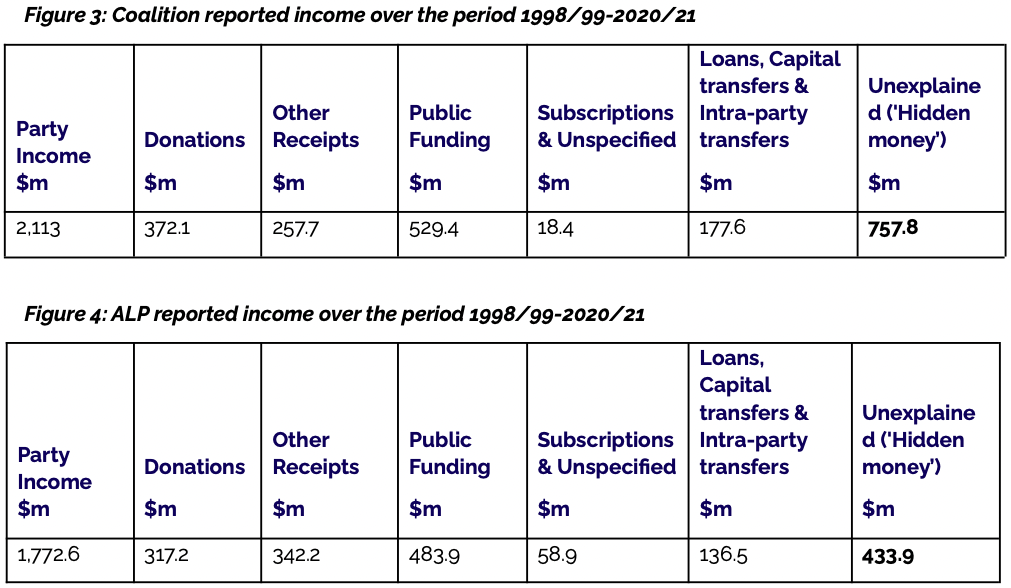 Why is political finance opaque?

The Commonwealth has the weakest donation laws in the country. Limitations in the Commonwealth Electoral Act 1918 (Cth) (the Act) include the high disclosure threshold for donations; the fact that donations are not required to be aggregated for the purposes of disclosure (meaning multiple donations of under-threshold amounts can be made to different party branches without disclosure); and the fact that donations made through attendance at party fundraisers, priced at $10,000-20,000 per person, are currently not categorised as gifts under the Act. The rise of hidden money may also be partially attributable to limitations in the effectiveness of the AEC in administering the Act, as the 2020 performance audit of the Australian Electoral Commission (AEC) by the Australian National Audit Office (ANAO) identified.2 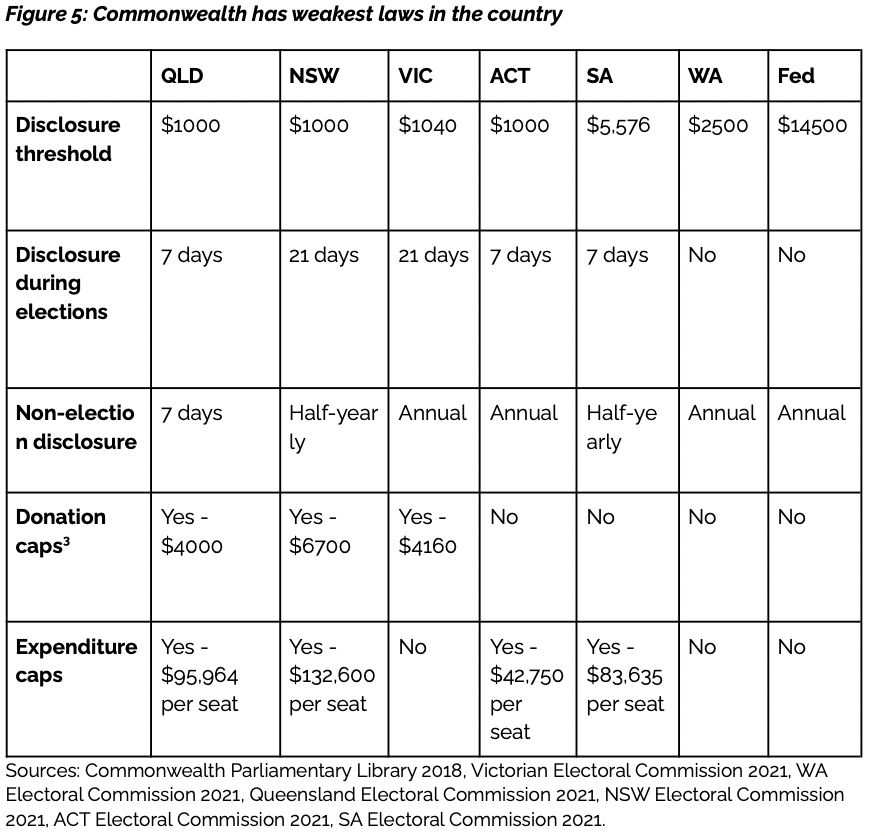 Beyond reinforcement of the AEC’s powers and resources, further reform of our regulatory system is required to promote transparency and accountability of political finance. Specifically, these reforms include:

1 All amounts reported in this paper are in real dollars. The technical assistance required to perform the analysis in this paper is provided by Melbourne Law School researcher, Malcolm Anderson.

3 These are the party caps: other amounts may apply for candidates, associated entities and third parties.