The power to hold public hearings when it is in the public interest to do so is indispensable to the work of an effective integrity commission. Indeed, all states and territories – with the exception of Victoria and South Australia – have acknowledged the importance of this power by conferring it upon their commissions. In spite of this, the recently tabled National Anti-Corruption Commission Bill 2022 (Cth) (‘NACC Bill’) proposes that public hearings should only be able to be held after an additional ‘exceptional circumstances’ threshold is met.

Opposition to integrity commissions being able to hold public hearings when it is in the public interest to do so is generally based on unsubstantiated claims that public hearings inflict undue reputational damage, and the inclusion of the ‘exceptional circumstances’ threshold appears to have been designed to assuage fears of such damage. Yet these fears have no basis in fact: in all investigations since 2012 which have involved public hearings, the New South Wales Independent Commission Against Corruption (‘NSW ICAC’) has made findings of corrupt conduct or serious corrupt conduct against at least one primary suspect.1

Alternative measures to safeguard reputations exist if they are determined to be necessary. The exceptional circumstances test which limits the ability of the National Anti-Corruption Commission (‘NACC’) to hold public hearings purports to respond to a problem for which no evidence exists. Accordingly, the test and its overly high threshold would serve only to compromise the effectiveness of the NACC.

Pursuant to s 62 of the NACC Bill, the Commissioner may hold hearings for the purpose of corruption investigations. However, these hearings must be held in private unless the Commissioner is satisfied that ‘exceptional circumstances’ justify holding the hearing in public, and that it is in the public interest to do so.2

This ‘exceptional circumstances’ requirement is a serious backdown on the Government’s promised set of design principles, including its commitment to introduce an integrity commission with the powers of a standing Royal Commission. Indeed, preventing the proposed NACC from holding public hearings where it would be in the public interest to do so amounts to a negation of the role of a Royal Commission.

The inclusion of an ‘exceptional circumstances’ requirement as well as a public interest test also involves a specious circularity: after the Commission has carefully considered a range of factors, including whether a public hearing might unfairly damage a person’s reputation, and determined that it is in the public interest to hold a public hearing, it is met by a further and near-insurmountable hurdle.

Figure 1 shows that Australia’s strongest anti-corruptions commissions are subject to no such ‘exceptional circumstances’ requirement, and only the Victorian Independent Broad-based Anti-corruption Commission must meet this threshold before proceeding to a public hearing.3

The meaning of Victoria’s ‘exceptional circumstances’ requirement was considered in R and M v Independent Broad-Based Anti-Corruption Commissioner, where it was held that the term requires circumstances which are ‘clearly unusual and distinctly out of the ordinary’.12 Determining whether such circumstances exist requires ‘both a qualitative distinction between the circumstances which might ordinarily be inquired of by the respondent, and, in addition, an assessment that those circumstances might be reasonably rare.13

On this construction, the inclusion of ‘exceptional circumstances’ in the NACC Bill would expose the Commission’s decision to hold a public hearing to a high threshold vulnerable to legal challenge. Such challenges can be exploited by well-resourced litigants to both delay investigations and obtain knowledge of the material that the Commission has against them. The spectre of these risks may mean that the Commission is less likely to hold a public hearing, even in cases where the threshold would be met.

A requirement with such serious consequences should only be included if it is justified by evidence. As the below case study of the New South Wales experience establishes, no such evidence exists.

Pursuant to s 31(1) of the Independent Commission Against Corruption Act 1988 (NSW), the NSW ICAC may conduct a public inquiry ‘if it is satisfied that it is in the public interest to do so’.14 Section 6(2) requires the agreement of the Chief Commissioner and at least one other Commissioner before such an inquiry can be held. To be clear, the ICAC need not satisfy an ‘exceptional circumstances’ test before embarking on a public inquiry.

There is no evidence of this lower threshold having done anything to inflict undue reputational damage. Figure 2 shows that in 32 out of 33 completed investigations since 2012 where public inquiries have been held, findings of corrupt conduct have been made against the at least one primary suspect. 15 The sole exception is Operation Spicer, where the High Court case of ICAC v Cunneen16 and s 74BA of the Independent Commission Against Corruption Amendment Act 2015 (NSW) constrained the NSW ICAC in making specific findings of corrupt conduct in the circumstances against the primary suspects.17 Operation Spicer did, however, result in one discrete finding of corrupt conduct against a non-primary on largely unrelated matters,18 and seven referrals to the Director of Public Prosecutions. 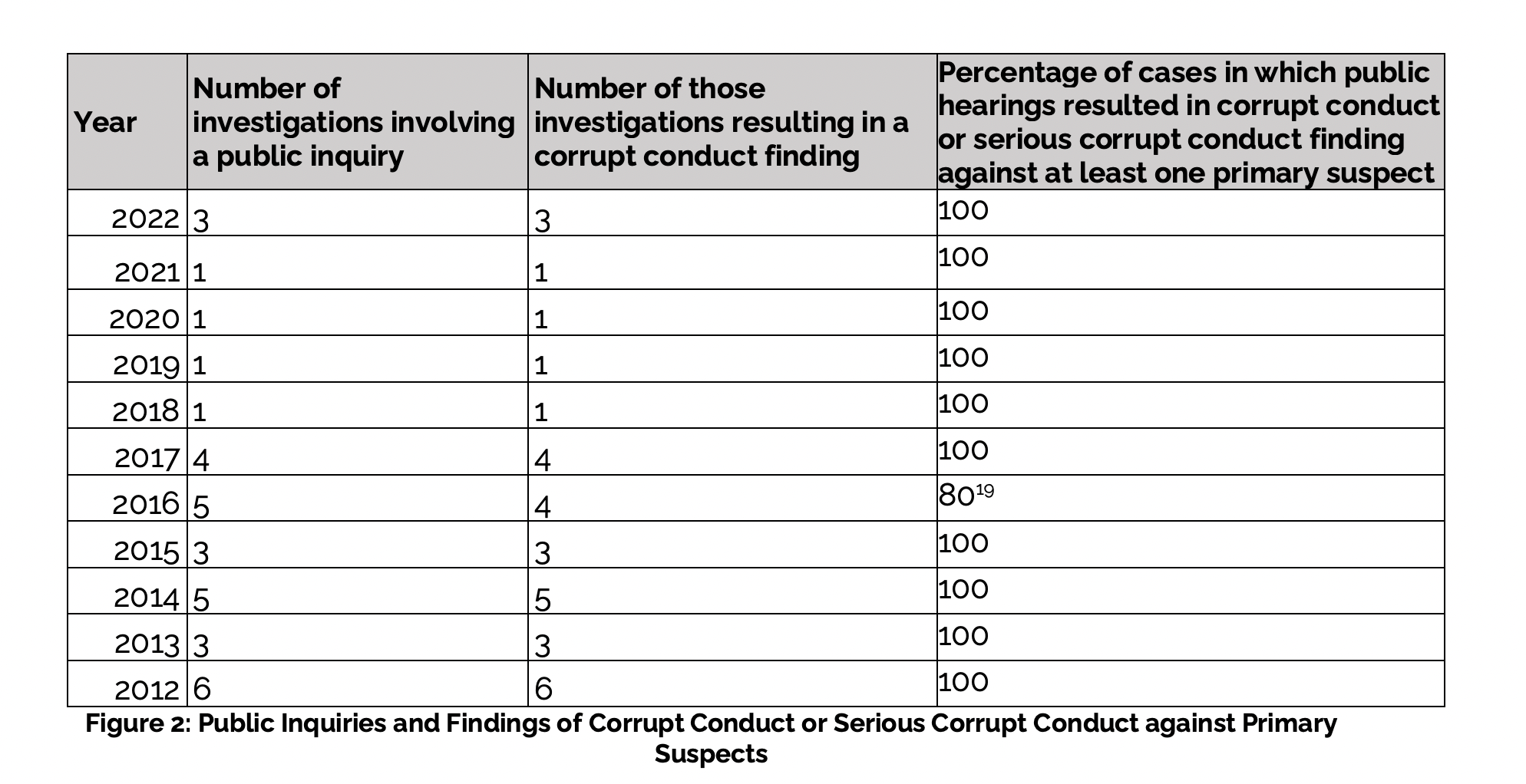 It therefore appears that in virtually all cases over the last ten years, public inquiries have resulted in findings of corrupt conduct or serious corrupt conduct. Notwithstanding, in all cases, such inquires have resulted in general findings of wrongdoing against primary suspects. Using this metric, there is no evidence of undue reputational damage having been caused by public hearings held by the NSW ICAC over the last decade.

Protecting Reputation in the NACC Bill

It is important to recognise that the NACC Bill already proposes appropriate safeguards against undue reputational damage.20 Specifically, the Commission is empowered to make public statements at public hearings, as well as statements in investigation reports, if it is satisfied that it is ‘appropriate and practicable to do so to avoid damage to a person’s reputation’.21

If, notwithstanding the lack of evidence establishing the need to provide for reputational safeguards, the ‘exceptional circumstances’ test cannot be eliminated without the inclusion of additional protections, the Centre for Public Integrity has developed a series of recommendations which would both achieve this purpose and avoid the imposition of undue restrictions on the work of the NACC. These recommendations include:

Sunlight is the best disinfectant, and integrity commissions must have the power to hold public hearings when it is in the public interest to do so. The NSW ICAC experience demonstrates how a public interest test, combined with a requirement that a public hearing can only be held with the agreement of at least the Chief Commissioner and one other Commissioner, has resulted in public hearings which have all found corrupt conduct, serious corrupt conduct, or other wrongdoing. There is no evidence of this approach having resulted in undue reputational damage. Alternative approaches to protecting reputations are available if they are determined to be necessary. Insofar as these protections would achieve the relevant objective without unnecessarily burdening the National Anti-Corruption Commission’s ability to fulfil its statutory purpose, they are the preferable response to a problem of which no evidence exists.

1 Note that we do not consider whether such findings were overturned on appeal to the Supreme Court of NSW – just the findings of NSW ICAC.

19 Note Joseph Tripodi was found to have engaged in serious corrupt conduct, though was not named as one of the initial officials to be investigated. Many other of the primary suspects were referred to the Department of Public Prosecutions.

22 See for example Committee on the Independent Commission Against Corruption, Parliament of New South Wales, Reputational impact on an individual being adversely named in the ICAC’s investigations (Report 4/57, November 2021) 14 (Recommendation 2).