Executive law-making on the rise

Executive law-making has increased significantly in the past 30 years. Through the delegation of law-making to the executive, power is being concentrated in the hands of individual Ministers. Parliament is abrogating its responsibility for important policy decisions, including decisions that relate to the expenditure of significant public funds.

Delegations allow the Executive and often individual Ministers to make laws that affect the rights and obligations of individuals, businesses and industry without consulting Parliament. Of course, delegation of law-making is often necessary. It allows for technical and administrative detail to be worked out later, for frequently changing regulatory regimes to keep apace, and for the executive to respond to emergencies. However, in recent times we have seen a dramatic increase in the significant issues of policy and public spending that have been determined by the Executive, including major parts of the Government’s response to the COVID-19 crisis. This increase in delegated law-making power has been accompanied by decreased parliamentary oversight. 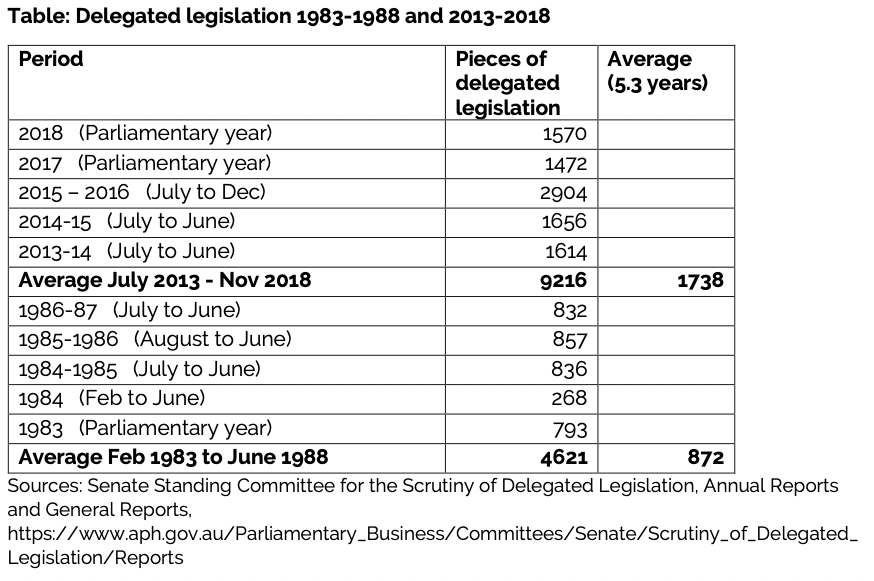 In response to the COVID-19 public health emergency, Parliaments all over the country have significantly expanded delegated emergency powers, resulting in a major concentration of power in the executive during this time. This has meant that major policy decisions affecting the welfare of millions of Australians, imposing rights and obligations on them, and involving multibillion-dollar public spending are made by the Executive with no parliamentary input and little parliamentary oversight.

Examples of law-making powers that have been delegated to the Executive in response to COVID-19 are:

The majority of these decisions are made via delegated legislation. Some, including decisions under the Biosecurity Act and the $40 billion Finance Advance, are entirely exempt from parliamentary oversight, including through the committee system.

Even compared to other government decision-making, there is very little accountability or scrutiny of executive law-making.

Challenging delegated legislation in the courts for exceeding its authorising statute is possible, but it is a largely ineffective scrutiny mechanism. The nature of modern delegations are generally very wide, and the Court has adopted a more constrained approach to reviewing delegated legislative decisions than other governmental decisions.

Otherwise, delegated law-making is supervised by parliament. However, parliamentary scrutiny at the federal level is only for technical issues (not policy decisions), and is retrospective in its operation.

After being made, delegated legislation must be listed on the register website, and tabled in Parliament. It will then be subject to technical scrutiny by the Senate’s Committee for the Scrutiny of Delegated Legislation. The Committee’s terms of reference include includes compliance with statutory and constitutional requirements, the protection of individual rights and liberties, levels of consultation by those affected by the instrument; principles of parliamentary oversight; and whether the instrument contains matters that should have been included in a parliamentary enactment.

Parliament retains the power to disallow most pieces of delegated legislation via a motion. Disallowance only operates prospectively, that is, until a motion is passed, the law will remain in force. Further, the Senate Committee has voiced concern about the effectiveness of disallowance. It reported:

“in practice, it is difficult for parliamentarians to keep abreast of the hundreds of instruments tabled each year, and all too often significant matters of policy are left to be determined by delegated legislation … while the committee draws its technical scrutiny concerns about delegated legislation to the Senate’s attention, there is no consistent scrutiny of its policy implications”.2

Some pieces of delegated legislation are exempt even from this form of scrutiny. The Legislation Act 2003 (s 44(2)(b)) currently allows for the Executive itself to exempt instruments from scrutiny.

On the 8th April 2020, the Senate resolved to establish a Select Committee on COVID-19 to inquire into the Australian Government’s response to the COVID-19 pandemic. The committee has received hundreds of submissions and held 20 public hearings to gather evidence and ask questions of government and stakeholders. Finance Minister Matthias Cormann has been the only Minister to appear at a public hearing.4

Outside of these limited Parliamentary processes, there is no independent accountability mechanism to review or scrutinise the conduct of Ministers.

The Statement of Ministerial Standards (the Ministerial “Code of Conduct”), which is designed to protect the integrity, fairness and accountability of the discretions vested in Ministers) is not independently investigated or enforced. There are no formalised consequences for breaches. Allegations are assessed internally by the Department of Premier and Cabinet, and reports are not made public.

The Centre for Public Integrity is an independent think tank dedicated to preventing corruption, protecting the integrity of our accountability institutions, and eliminating undue influence of money in politics in Australia. Board members of the Centre include former judges Tony Fitzgerald AC QC and David Ipp AO QC. This submission was reviewed by the Centre’s COVID response Project Committee, whose members are Professor George Williams AO, Professor Gabrielle Appleby and Professor Joo Cheong Tham.