Freedom of access to government information is an internationally recognised right and a vital aspect of the rule of law. 2 In Australia, this access is facilitated by the Freedom of Information Act 1982 (Cth) (FOI Act), which was enacted in response to recognition of freedom of information’s (FOI) crucial importance in providing access to personal information, transparency and accountability in policy making, and increasing public participation.3

These values remain codified in Australia’s FOI legislative architecture. For example, section 3(2) of the FOI Act provides that the Parliament intends to ‘promote Australia’s representative democracy by … increasing public participation in Government processes, with a view to promoting better-informed decision-making; and increasing scrutiny, discussion, comment and review of the Government’s activities’.4 The section further requires that Government information is ‘to be managed for public purposes’, and acknowledges that it is a ‘national resource’.5 Section 3(4) provides that it is Parliament’s intention that the functions and powers of the Act are to be performed to facilitate and promote public access to information ‘promptly and at the lowest reasonable cost’.6

Despite the Act explicitly recognising the FOI regime’s aspirations, Australia’s FOI regime continues to be undermined in practice by inordinate delay, under resourcing and the abuse of statutory exceptions. In light of these problems, the Centre for Public Integrity recommends:

Australia’s FOI regime is governed by the FOI Act. The FOI Act was passed in 1982 by the Fraser Government, after being proposed by the Whitlam Government in 1974 and considered in numerous reports throughout the 1970’s. The Act formed a key element of other contemporaneous public law reforms known as ‘New Administrative Law’.7

Broadly, the FOI Act’s two key functions can be distilled into information publication and access to documents – with the latter largely serving as an extension of the baseline disclosure in the former.

In response to perceived secrecy in the public service prior to reforms, 8 pt II of the Act requires most government agencies to publish accessible baseline information regarding their functions, activities, non-APS staff, organisational structure and general operational information.9

Part III of the FOI Act governs access to information. Section 11 of the Act grants every person ‘a legally enforceable right to obtain access […] to a document of an agency; or an official document of a Minister’.10 Access to documentation is limited by numerous statutory exemptions.11 At first instance, access requests are made in writing directly to the relevant agency or Minister. 12 If a request is refused, the applicant may request an internal review of the decision by an employee other than the original decision maker or appeal directly to the OAIC. 13 Decisions not finalised within the statutory timeframe of 30 days, or decisions refused again after internal review, may also be directly appealed to the OAIC. 14

The Office of the Australian Information Commissioner

Section 8 of the AICA Act enumerates the FOI functions of the OAIC: these include, amongst other things, helping agencies to comply with their disclosure obligations, providing advice and training, issuing FOI guidelines, and performing merits review. The latter is the OAIC’s most important statutory function, with unsuccessful applicants permitted to appeal to the OAIC after failing either at first instance, or after internal review, to obtain access to documents sought. Parties dissatisfied with the merits review outcome may still apply to the AAT, and AAT decisions may be appealed to the Federal Court of Australia on matters of law. 15 As Federal Court and AAT action remain open to the parties, the OAIC’s review powers add an additional layer to what is already a byzantine appeals process. Figure 1 schematically represents the current process for FOI requests and their respective appeals.

Performance of the current FOI regime

The introduction of the OAIC in 2010 was supposed to speed up and cheapen the FOI appeal process by providing a flexible clearing house antecedent to the AAT. According to Geoffrey Watson SC, it has in fact ‘had the opposite effect’ on cost and speed.16 This conclusion is corroborated by the OAIC’s own data.

Since 1984-5 the number of FOI requests has hovered between 20,000 and 45,000 per year with no structural trend. For example, 2003-04 saw FOI applications peak at 42,627, then halve to 21,587 by 2009-10 and once again steadily increase. The median FOI requests throughout this period was 33,804 per year. These data suggest that the baseline demand from citizens for governmental information seems to have changed little since the FOI regime was introduced in 1982. 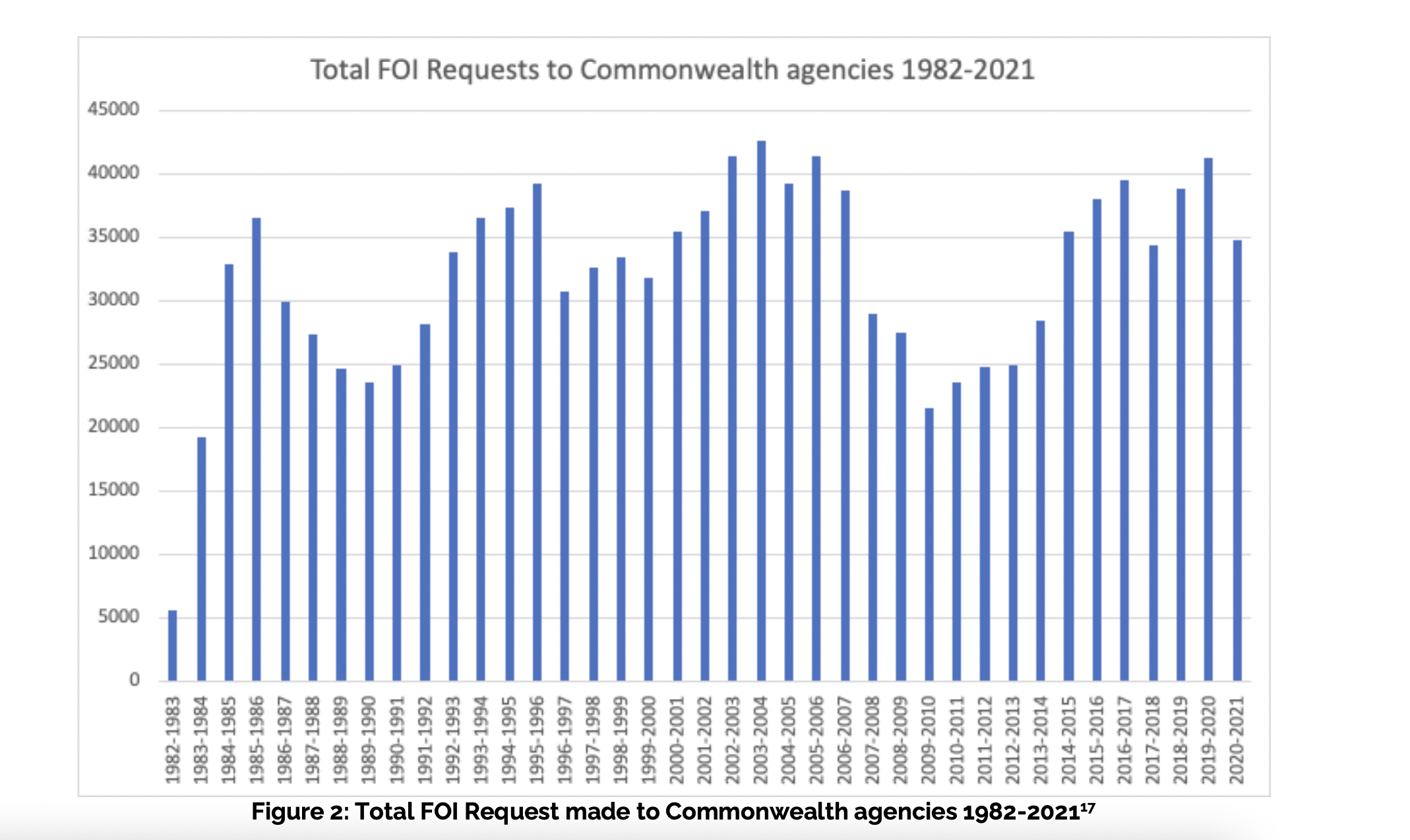 Despite demand changing little, the speed with which FOI requests have been resolved has been falling. Section 15(5)(b) of the FOI Act requires that requests should be resolved ‘as soon as practicable’, but ‘no later than the end of the period of 30 days after the day on which the request is received’.18 This statutory timeline has been increasingly ignored. For example, in 2011-12, 1.3 per cent of FOI requests were over 90 days late; by 2020-21, this figure ballooned to 12.4 per cent. Over this same period, the total proportion of decisions made outside the statutory period had increased from 11.5 per cent to 22.5 per cent: 2016-17 was particularly noticeable, with almost half of FOI requests being resolved outside of the statutory timeframe.

Such significant statutory delays should by no means be taken lightly. Every delay is in breach of the agency’s statutory obligation. Indeed, Senator Kim Carr has described such delays as not emanating from a ‘culture of secrecy’ but emblematic of a ‘culture of lawlessness’.20

Significant delays, as well as arguable abuse of the exemption criteria (see page 9) have, understandably, lead to a clogged and slow system littered with hurdles. There are increasing delays at first instance, internal review and OAIC review. For example, while the number of FOI requests increased 34 per cent between 2011-12 and 2020-21, the number of internal review applications increased by 128 per cent over this same period. 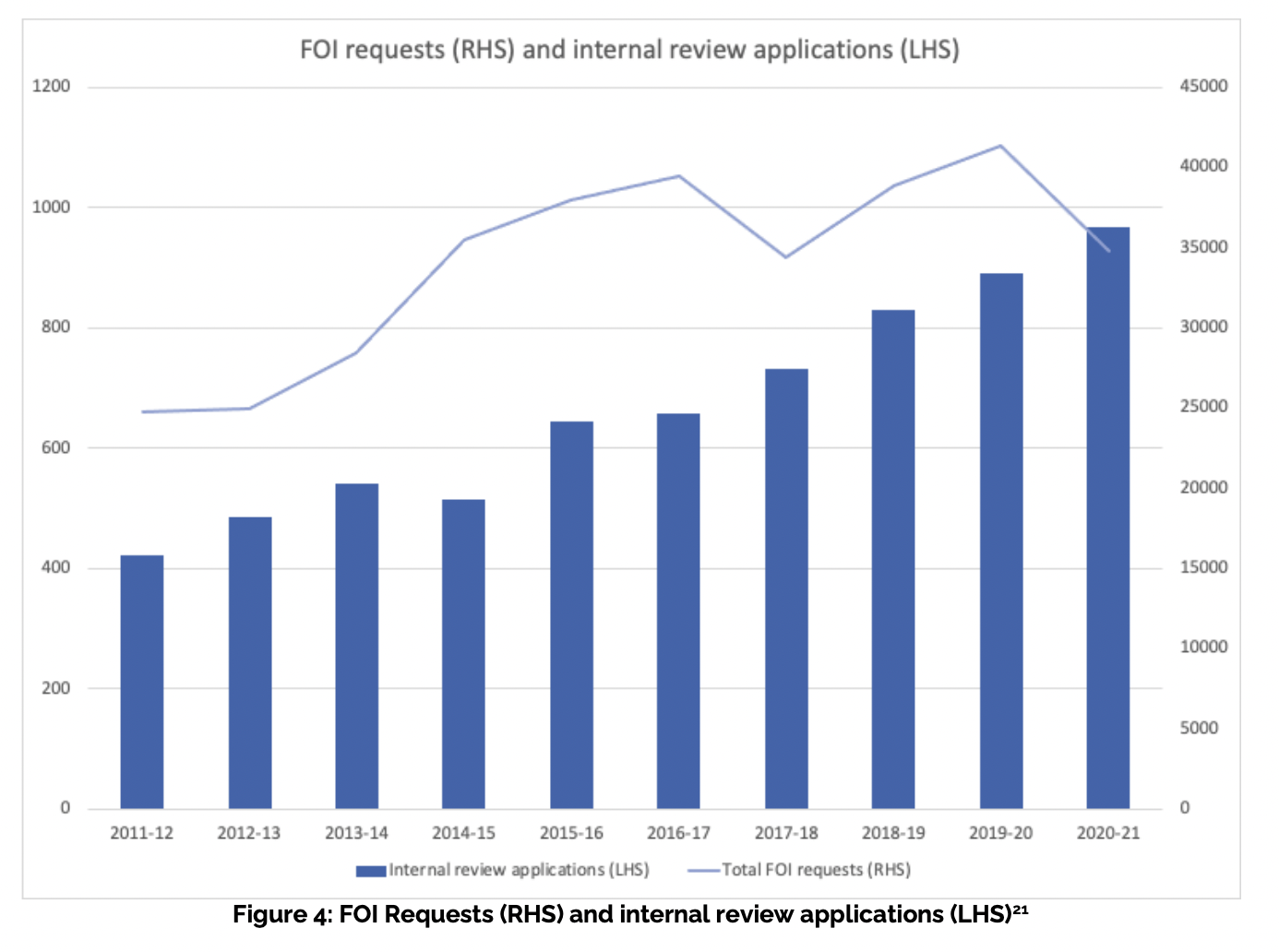 OAIC appeals have steadily increased since 2012-13. However, like other elements of the system, the OAIC’s review capabilities are increasingly burdened. While the OAIC managed to keep up with the volume of request received until 2014-15, 22 since 2015-16 the growth in appeals to the OAIC has significantly outpaced the growth in the OAIC’s ability to finalise them. This has led to a continual increase in the average time to finalise reviews over this same period. 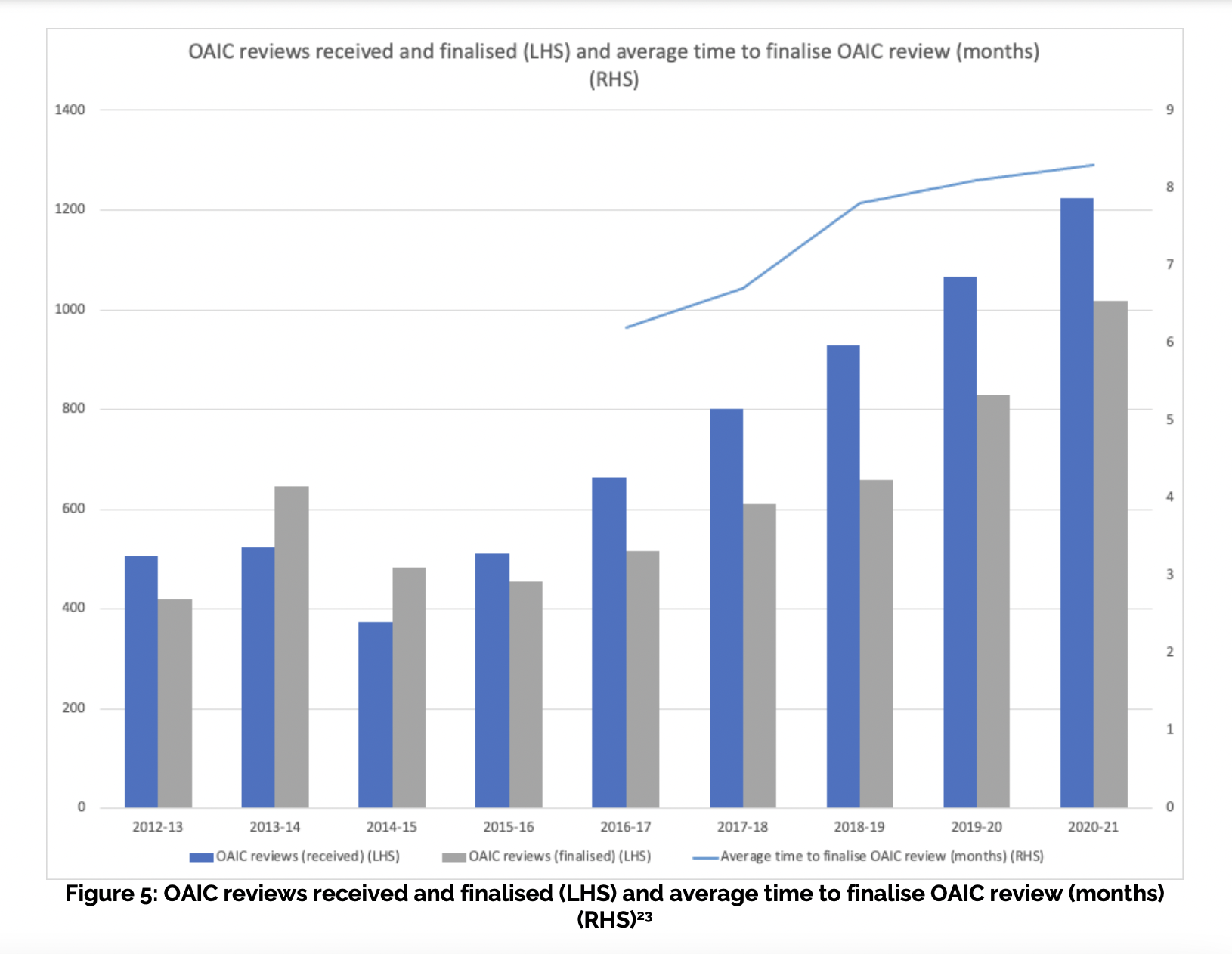 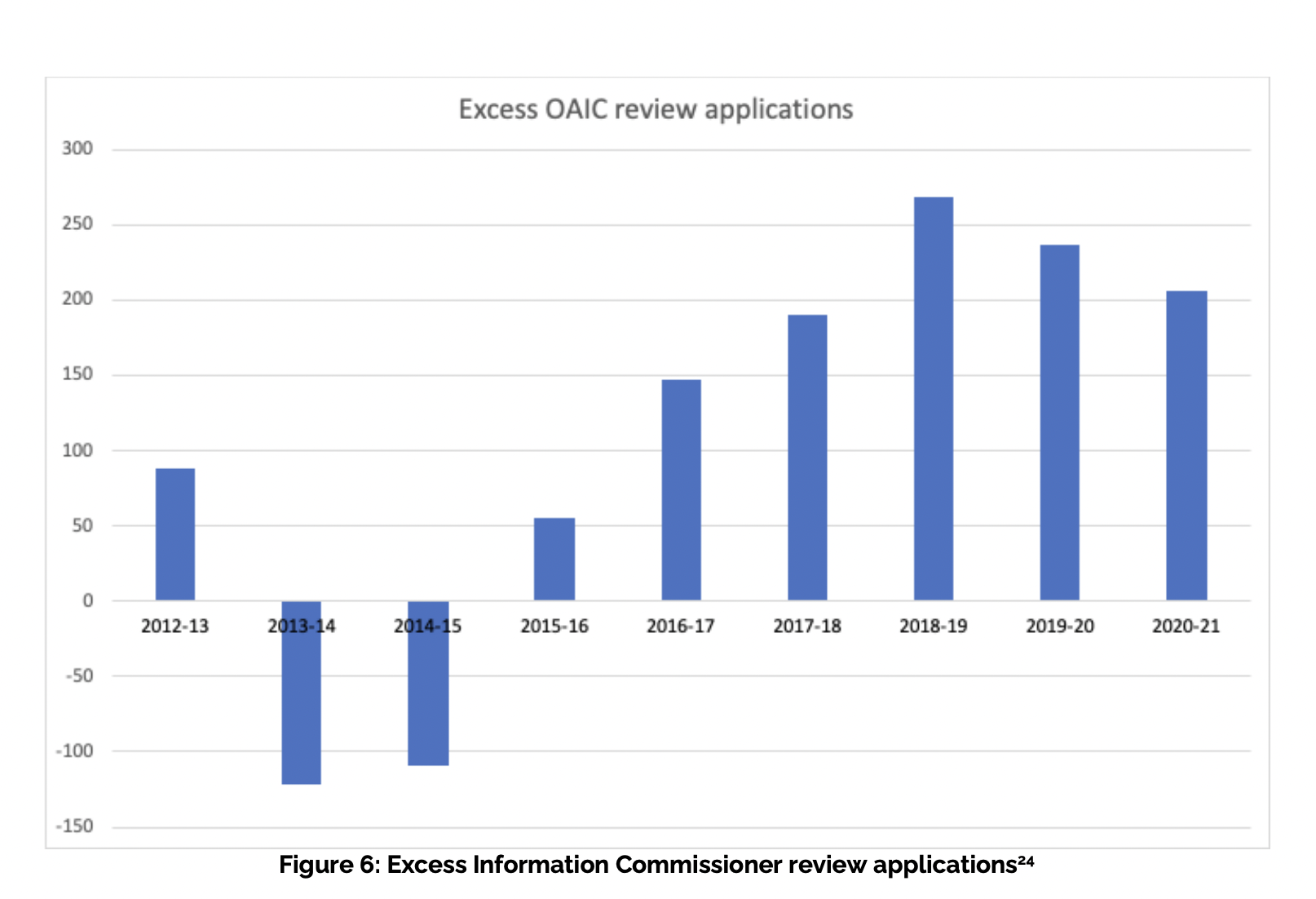 The significant delays and inability to complete OAIC merits reviews is partly attributable to the lack of sufficient staff to manage the increasing number of claims. Since 2011-12, the number of FTE staff per OAIC review request received has fallen by 50 per cent. Indeed, these concerns have been expressed by the OAIC itself. Before the Senate Legal and Constitutional Affairs Legislation Committee in 2019, Information Commissioner Angelene Falk revealed that a ‘gap remains between the volume of work coming into the office and the staff that’s needed in order to process those matters’.25 She specifically requested that the OAIC be allocated funding for 50 per cent more staff to manage with the volume of OAIC review requests. 26 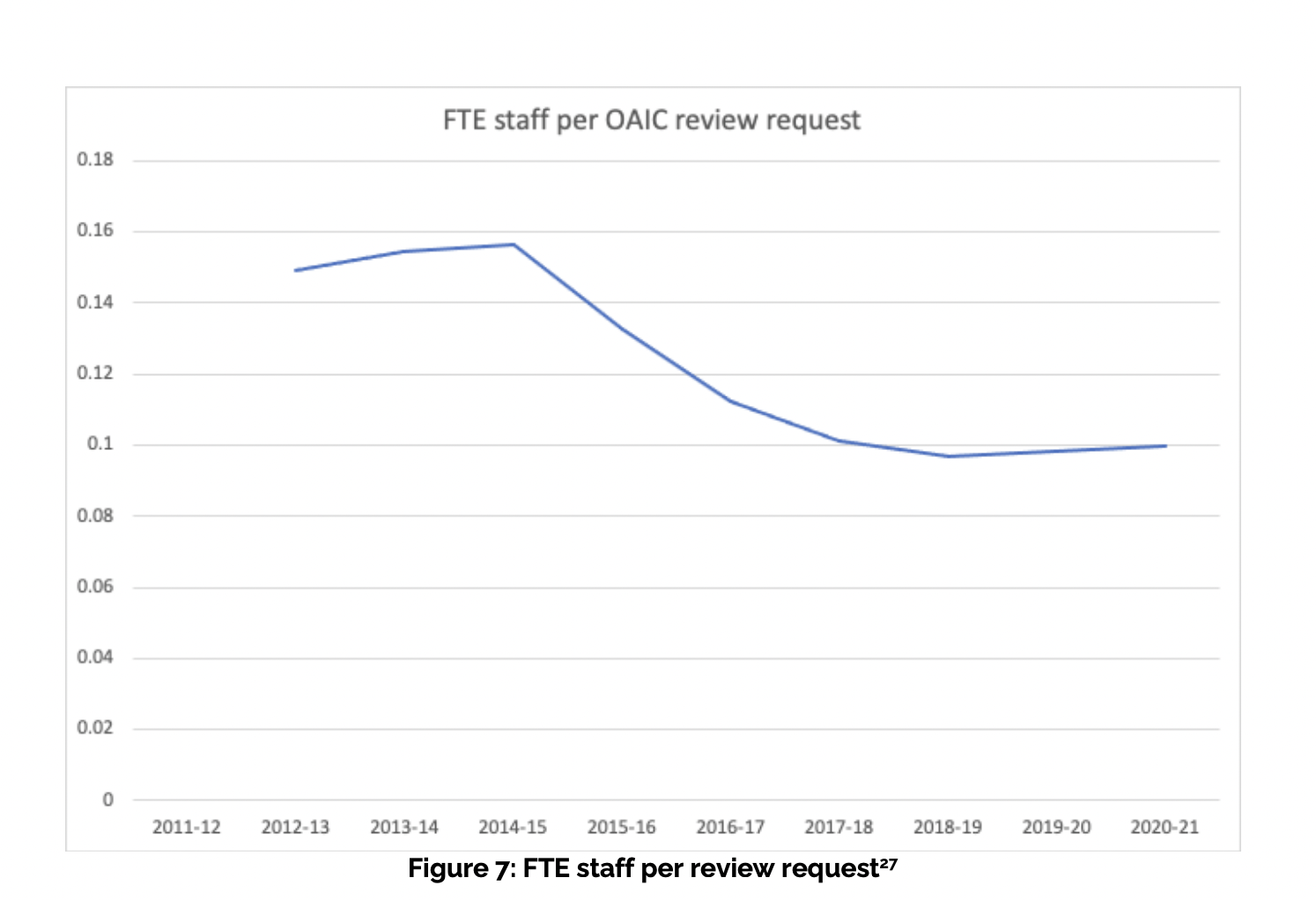 A culture of secrecy

The FOI Act is clear that Australians have a right to information, but this is qualified by the numerous statutory exceptions which often stand in the way of meritorious claims.

Part IV of the FOI Act details the statutory exceptions to access to freedom of information.28 It is upon these exceptions that claims are refused either in full or in part at both first instance and appeal. A handful of agencies are completely exempt from FOI requests.29 Exceptions to request from non-exempt agencies are either outright or are public interest conditional exemptions. Outright FOI exemptions include: •

Each exception appears, prima facie, to be reasonable. The processes by which they are applied, however, are prone to abuse. Sections 11A(3)-(5) of the Act provide that access is to be granted or refused by the ‘agency or Minister’.30 Indeed, internal reviews, while conducted by a different individual, are still conducted by the original agency.

While refusals at first instance must be supported by reasons in writing, the internal nature of exemption determinations allows documents to be refused on fabricated grounds with no repercussions.31 Internally embarrassing or politically sensitive documents may be refused by the relevant agency at least twice for periods frequently outside of the statutory 30-day window, before reaching the OAIC, where applicants face another delay of up to eight months. Such delays serve to dissuade prospective applicants. Moreover, the salience of a given issue has usually drastically decreased by the time it reaches the OAIC for review.

This emergent ‘culture of secrecy’ is perhaps more worrying than the incessant clogging in the appeals system of the FOI regime. This is most clearly seen by the change in accepted claims at first instance by the relevant department. Since 2011-12 the proportion of claims granted in full has fallen by over 30 per cent. This has been accompanied by a 50 per cent increase in the proportion of claims refused in full. 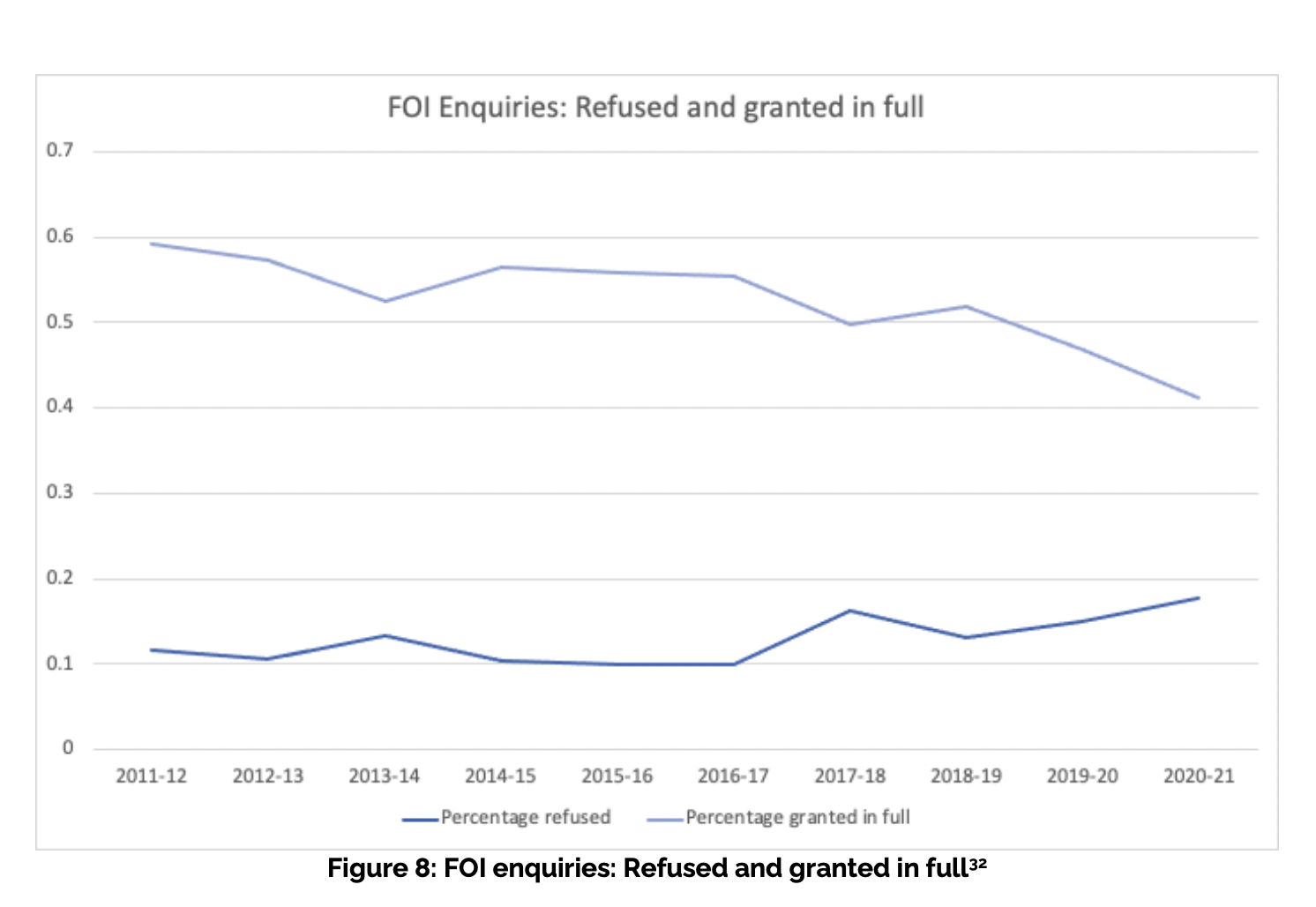 These figures are most troubling. For example, in 2020-21 almost 35,000 FOI requests were made. In that same year there were 968 internal review requests, 1224 requests made for OAIC review and 72 appeals to the AAT. Most refusals were never appealed, despite the potential (yet ultimately unknown) merits of the claims.

With 41 per cent of the OAIC’s discretionary reviews setting aside the original decision, 33 and over 40 per cent of internal reviews granting access at least in part to the originally refused decision, many meritorious claims are unduly refused and delayed by the current FOI system.34 The relatively low proportion of claims appealed either to internal review or the OAIC directly further demonstrates that the substantial issues with the system are coming to fruition at first instance.

There are several recent conspicuous and publicly available examples of AAT and OAIC decisions which demonstrate some of the (potentially many) abuses of the exemption system: •

A study in systemic failure – the Department of Home Affairs

While the Department of Home Affairs was created in 2017-18, it is a case study in the failure of Australia’s FOI regime both in terms of resourcing and disclosure. Despite finalising more requests than it received in 2017-20, it has since consistently been unable to meet its caseload. 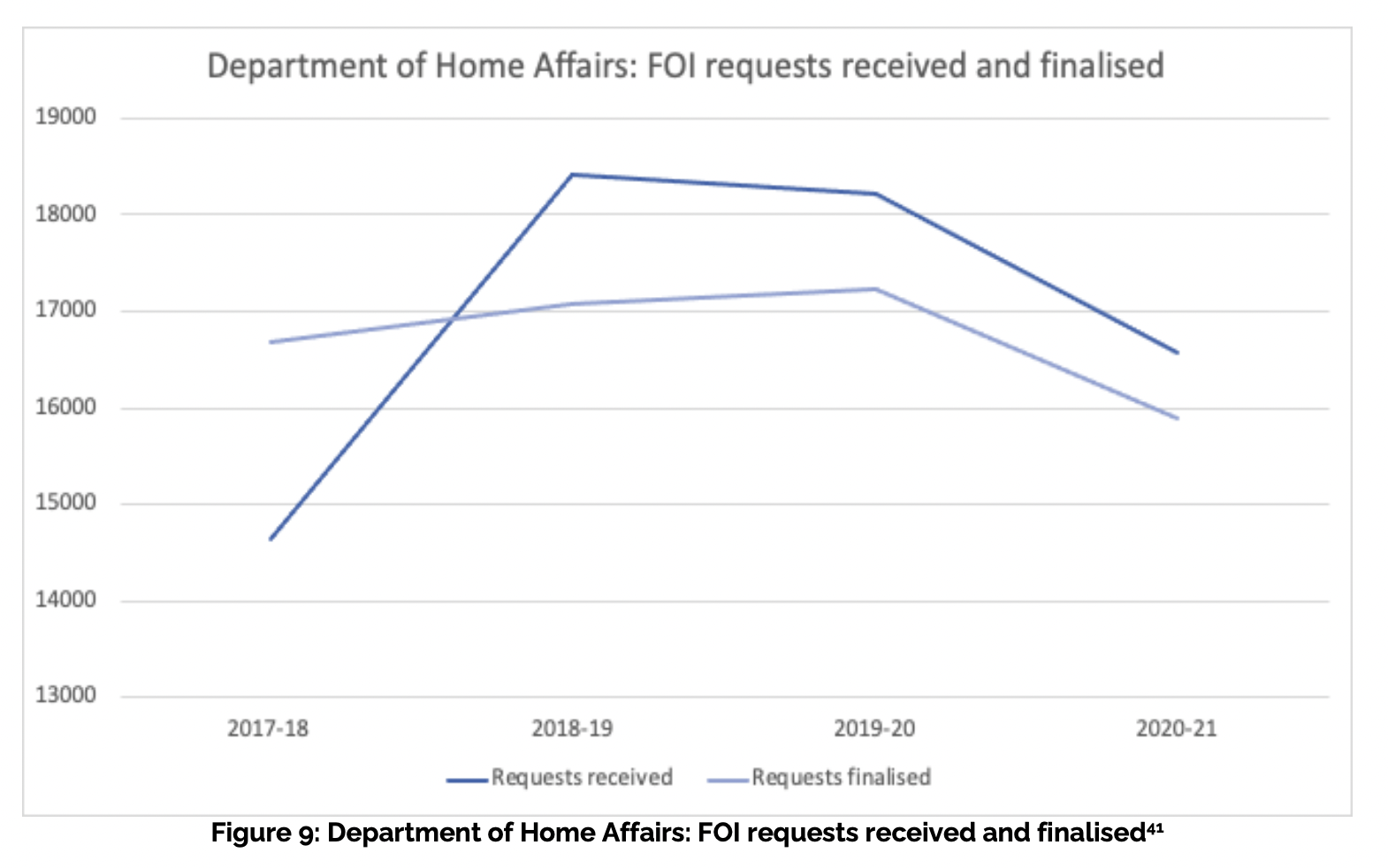 While the Department’s inability to meet its load may appear innocuous, this fed into a backlog of over 4300 uncompleted requests by 2020-21 and an increasing inability to meet the obligatory statutory timeframe. 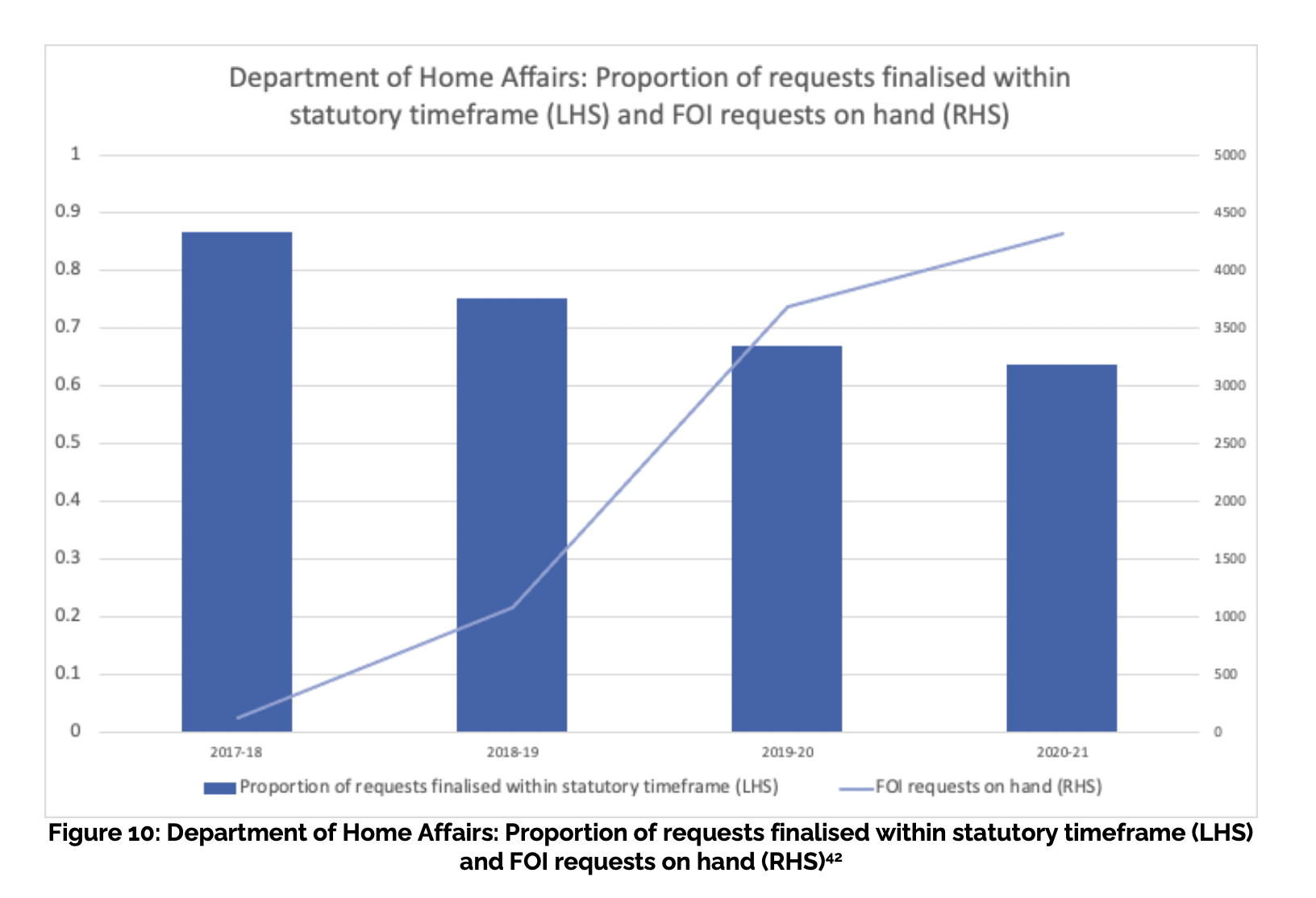 Indeed, the Department’s performance with respect to FOI was so poor that throughout 2020-21 the OAIC conducted a ‘Commissioner-initiated investigation’, finding that the Department did not have appropriate measures in place to ensure compliance due to ‘absence of adequate governance and systems of accountability’.43

The Centre for Public Integrity recommends that reform to the FOI system be pursued as a matter of urgency. We recommend that:

22 The OAIC often maintain a ‘backlog’ of complaints on hand. Therefore, in some years more may be completed than received, and vice-versa.